What Our Customers Say About Us

"When my son Ian was 5, he had months of reoccurring strep throat with tonsillitis.  He had course

after course of antibiotics, but the strep kept coming back.  The medical doctors advised a tonsillectomy.  Dr. Kim Fliegel recommended a course of colloidal silver at low doses for several weeks.  We used her Liquid Guardian brand by KinetiTeK.  Ian is now almost seven, still has his tonsils, and has never had strep throat again!  Thank you KinetiTeK!"

"My husband contracted shingles and I purchased Liquid Guardian Colloidal Silver right away.  My husband took it orally as well as used it topically. He only had pain the first two days and by the third day he was feeling really good.  I highly recommend this product!"

"My whole life I've never found anything that would kick out a cold before it got bad.  I was feeling a cold coming on and coughing quite a bit.  I had a few doses of the Liquid Guardian Colloidal Silver and the next day I woke up feeling great!  No more coughing, and the cold never progressed. Thank you so much!  I am recommending it to a friend that has fibromyalgia and a compromised immune system".

"I had suffered from a chronic sinus infection for about a year. It would get better and then about
week later it would come back.  I used the netti pot and tried many things, but nothing helped.
The medical doctor told me it was just a cold.   One day a co-worker  told me about Liquid Guardian colloidal silver. I used it in the netti pot twice a day for a bout a week and I have been
free and clear from any sinus infection for about three months now.  I also had suffered from an
abscess in the gumline just 2 or 3 weeks ago that came on suddenly.  The X-ray at the dentist
showed a massive infection.  They did a root canal and I took a full course of antibiotics,
but still had a lot of pain. I used the Liquid Guardian colloidal silver on a piece of paper towel
and placed it against the gum line where the abscess was.  I left the colloidal silver in place
for about 30 minutes twice a day for 2 days and the abscess and pain  was completely gone.
Thank you so much KinetiTek!"

"I was very sick for about three weeks with coughing, neck pain, no appetite and no energy.  I took the antibiotics the medical doctor prescribed.  There was no change.  I took Liquid Guardian Colloidal Silver at 1 TBSP 5 times a day for two days, then only 4 times a day on the third day.  By the end of the third day I was feeling pretty good.  The fourth day I flew out of town without any problems!  It was amazing!  Thank you so much!"

"I have had cystic acne for about three years in which it got really bad about six months ago.  I have tried everything!  I have spent a lot of money seeing many types of doctors and nutritionists, as wellas taking expensive remedies.  Nothing worked.  I began a new regimen with Dr. Kim using Liquid Guardian Colloidal Silver by KinetiTeK.  That stuff is amazing, it absolutely works wonders! Almost immediately the acne began clearing and is getting better every day.  Thank you KinetiTeK!"

"I was having a sinus infection with drainage and a cough for over a month.  Within a week of taking Liquid Guardian colloidal silver, the infection, the drainage and the cough were completely gone.  It is amazing!"

"The first time I took Liquid Guardian Colloidal Silver,  I already had a cold and it dramatically lessened the duration of it.  After about two days on the Silver, it was gone.  The next time I started to get a cold, I immediate took the CS and it never took hold."

"This product is an absolute miracle!  The first time I used Liquid Guardian Colloidal Silver, I already had a cold that was in my lungs. Normally when I get a cold in my lungs, it can take several weeks to recover.  The Colloidal Silver reduced the duration and I was better after about a week.  Now I take Liquid Guardian at the first sign of a cold and it never takes hold.  I make sure to always have some on hand."

"I love the Liquid Guardian Colloidal Silver by KinetiTek.  I wouldn't be without it for my medicine cabinet.  I take a few doses at the beginning of symptoms so they never develop into a full blown illness.  The first time I used the CS, I had a sore throat for about three days that wouldn't go away. I took a few small doses and by the next day, the sore throat was completely gone.  I even treat my cuts with it and they seem to heal so much faster.  It's a great product."

"I was surrounded by co-workers suffering from that awful bug earlier this year that lasted for three plus weeks with hard coughing and related symptoms.  On Tuesday evening, my throat felt like a popcorn casing had lodged into the right side (even though I hadn't had any popcorn). I drank water, ate, cleared my throat, etc. It didn't go away. By Wednesday, my sinuses began to feel like they were starting to give in to the bug. Thursday evening I finally pulled out my bottle of Liquid Guardian Colloidal Silver. I gargled some and swallowed some a couple of times that night. The next morning when I awoke, my throat was quite normal and all "hints" of worse things were completely gone."

"My husband felt like he was feeling feverish and had been exposed to a stomach flu.
I pulled liquid guardian colloidal silver from the cupboard and told him to take 1 tsp three
times a day. The next day he felt a little better and by the day after, he was back to
work and the illness never manifested."

Disclaimer:  These products have not been tested or approved by the U.S. Food

and Drug Administration.  These products are not intended to diagnose, prevent,

treat or cure any disease.  KinetiTeK Nutraceutical Solutions makes no claims or promises as to health benefits of its dietary/health supplements.  All research information is provided as a courtesy to our customers.  Consequences of dietary, topical or other use of any

product is the sole responsibility of the customer.

© 2017  All rights reserved. KinetiTeK is a registered trademark. 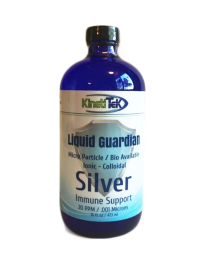 SILVER IN THE NEWS

650 different disease causing pathogens were destroyed in minutes when exposed to small amounts of silver.

Pub Med: The Effects of Colloidal Silver Against Candida Albicans

Effect of Silver's Antibacterial Activity Against Staph Aureus and E-Coli

Recommend this page on: